Yehuda Bacon (Czechoslovakia, 1929) … To the Man who Restored my Belief in Humanity

The Anguish of Liberation as Reflected in Art

These pieces from the Yad Vashem Art Collection show how survivors reacted to their liberation through art. Click HERE for the complete online exhibit. 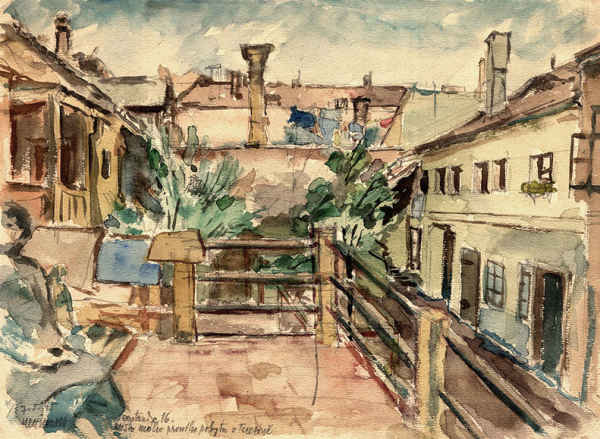 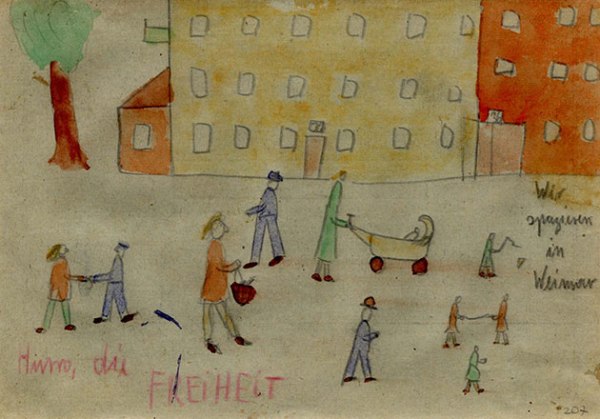 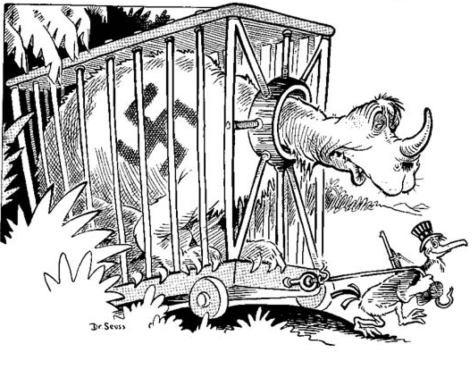 Most people don’t equate the silly semantics of Dr. Seuss with WWII. He did, however, spend part of his career penning political cartoons both as a civilian and a captain in the U.S. army during WWII. In the early years of the war, Seuss (aka Theodor Seuss Geisel), drew over 400 political cartoons for a left-leaning New York newspaper called PM denouncing Hitler and Mussolini. His cartoons strongly supported FDR and at the same time ridiculed and railed against the American Japanese, for which he later apologized. In 1943, he joined the U.S. Army and headed up the Animation Dept. of the First Motion Picture Unit of the U.S. Army Air Force where he wrote and produced several propaganda films including: • Your Job in Germany  • Our Job in Japan  • Private Snafu  • Gerald McBoing-Boing … and others.

END_OF_DOCUMENT_TOKEN_TO_BE_REPLACED 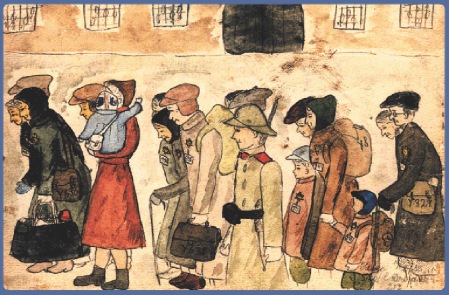 In Honor of International Remembrance Day

First they came for the Jews
and I did not speak out
because I was not a Jew.

Then they came for the Communists
and I did not speak out
because I was not a Communist.

Then they came for me
and there was no one left
to speak out for me.

Martin Niemöller: (1892-1984) Niemöller was a German pastor and theologian. Originally he supported Hitler’s policies, but eventually opposed them. He was arrested and eventually confined in Sachsenhausen and later, Dachau. He was liberated by the allies in 1945 and continued his career in Germany as a clergyman and noted pacifist.

Helga Weissova: (b 1929) Helga is a Czech artist and Holocaust survivor who entered into Terezin with her family on Dec. 4, 1941. She brought with her a box of paints and a notebook. She did more than 100 paintings doing what her father told her: “Paint whatever you see”. Here ended Helga’s childhood with the responsibility of painting everything she saw and experienced. She was one of the few survivors.

History always leaves a legacy behind for those who are willing to look for it. Elizabeth Rynecki is one such seeker. Recently I attended a talk Elizabeth gave about her “Chasing Portraits” film project, held in a beautiful women’s clubhouse nestled in the Sausalito hills overlooking San Francisco Bay. Elizabeth is the great-granddaughter of Moshe Rynecki, a prolific Warsaw-based artist who documented the Polish Jewish community in the interwar years (1918-39) in over 800 paintings and sculptures. Sadly, most of his body of work was lost in the Holocaust. Or so people thought. END_OF_DOCUMENT_TOKEN_TO_BE_REPLACED

I once saw a musical – Children of Eden – in which a giant snake plays a central role. It slithered and meandered around the stage in pieces. One actor played the talking head, garbed in a glittery jumpsuit, to portray the beauty of Satan before The Fall. The body was a large silvered tail handled by 5 other actors all dressed in the invisibility of black. They coiled and cavorted behind the head, twisting and dipping but never connecting. That separation fascinated me – that constant bit of ‘white space’ between the two. It was in that wiggle room where art took over. The snake completely sold the audience. It was my favorite part of the show.

END_OF_DOCUMENT_TOKEN_TO_BE_REPLACED

With Susy Flory (R) on the Mount of Olives with the golden Dome of the Rock in the background, built on the exact spot where King Solomon’s Temple once stood.

History is full of creative duos. Some spurred each other on through competition – others through unity and collaboration. Joshua Wolf Shenk’s “Powers of Two” (Aug 2014) highlights the collaborative process through many notable dyads: Lennon and McCartney, Jobs and Wozniak, Larry Bird and Magic Johnson, Wilbur and Orville Wright, Matisse and Picasso.

Many others come to mind: Woodward and Bernstein, Helen Keller and Anne Sullivan, Mel Brooks and Gene Wilder, even Rocky and Bullwinkle. The list goes on. But one team most people have never heard of is the artistic pairing of Bezalel and Oholiab. Funny names? That’s because they lived 3300 years ago in the south Sinai Desert. They were tasked with the construction of the Tabernacle – the mobile predecessor of King Solomon’s Temple in Jerusalem. The Book of Exodus sets the creative pair in historic context:

END_OF_DOCUMENT_TOKEN_TO_BE_REPLACED

When I’m stuck I often think of Michelangelo’s Captives – the four unfinished sculptures lining the Hall of Prisoners at the Galleria dell’Accademia in Florence. They writhe and grimace within their marble prisons as they lead visitors towards Michelangelo’s more famous “David”. And then there he is, at the end of the hall under a circle of light – one of the most celebrated pieces of art of all time. To me, that hallway and the placement of those marble-bound slaves depict the struggle that ultimately gives way to a masterpiece. END_OF_DOCUMENT_TOKEN_TO_BE_REPLACED