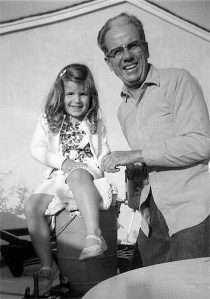 I was lucky enough to have all four grandparents deep into adulthood. Each brought something different to the mix that is now me. From Grampie I learned generosity. As a young man back in the early 1930s, he made some money on the stock market. Before investing into what would become his future company, he decided to tithe 10% to a missions project in China. Through the years, Grampie always credited his success to writing that first $2,000 check – even though it hurt. For the rest of his life he gave and gave and gave. And God gave more.

I learned adventure from Gramsie. She loved to travel. Grampie did not so he sent his grandkids instead. Being the eldest granddaughter, I got to go a lot. There was the Grand Tour of Europe at age 16, and China at 23. But my favorite was the year I turned 20 and fell in love with the Holy Land. For me there was a story around every corner: END_OF_DOCUMENT_TOKEN_TO_BE_REPLACED